KUALA LUMPUR (July 22): TRX City Sdn Bhd, a wholly-owned unit of the Minister of Finance Inc, has given IWH-CREC Sdn Bhd a four-and-a-half-month extension to pay the balance RM1.1 billion upfront deposit for the latter's acquisition of a 60% stake in the Bandar Malaysia project.

The deadline for IWH-CREC to settle the upfront payment has been moved to Sept 15 from April 30 "due to the Covid-19 outbreak", said Finance Minister Tengku Datuk Seri Zafrul Aziz.

TRX City has so far received RM148.2 million from IWH-CREC, or 2% of the RM6.45 billion net proceeds from the sale of the equity stake in the megaproject, Tengku Zafrul said in a written reply dated July 15 to a parliamentary question by Tony Pua (PH-Damansara) on the status of the payment.

"The balance of the sale proceeds will be received in stages up until 2023," the minister added.

TRX City was the parent company of Bandar Malaysia Sdn Bhd (BMSB), which is the master developer of the massive 197ha Bandar Malaysia development that is located at the site of the former Royal Malaysian Air Force base in Jalan Sungai Besi.

It sold 60% stake in BMSB to IWH-CREC for RM7.41 billion on Dec 17, 2019, after the parties inked a restated shared and amended share sale agreement and shareholder agreement.

At the signing of the agreements, then-finance minister Lim Guan Eng reportedly said that the revived deal warranted a larger advance payment of RM1.24 billion from IWH-CREC — comprising RM741 million deposit plus an additional RM500 million.

The RM7.41 billion price tag includes IWH-CREC's commitment to taking up a 60% obligation on a RM1.6 billion sukuk issued by Bandar Malaysia.

IWH-CREC is a 60:40 joint venture between Iskandar Waterfront Holdings Sdn BHd (IWH) and China Railway Engineering Corp (M) Sdn Bhd (CREC). This means CREC will have an effective stake of 24% in the project. 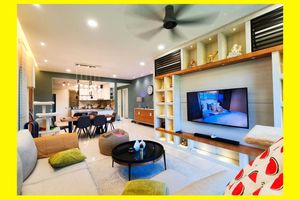