Najib, Shahrol, Ismee and Ibrahim Ali among those named in 16 suits by SRC

Najib, Shahrol, Ismee and Ibrahim Ali among those named in 16 suits by SRC
Hafiz Yatim / theedgemarkets.com May 10, 2021 | Updated 1 year ago KUALA LUMPUR (May 10): Former prime minister Datuk Seri Najib Razak's name appears prominently in two out of 16 civil suits by SRC International Sdn Bhd, firstly for breach of fiduciary duties and secondly for receiving RM42 million, for which he has already been found guilty and convicted recently.

SRC is a former subsidiary of 1Malaysia Development Bhd (1MDB).

In the actions filed in the High Court and Sessions Court in Kuala Lumpur and Shah Alam last Friday, there are two types of action sought.

The writ sighted by The Edge stated that in January 2019, SRC was placed under the new management under the Ministry of Finance (MoF) and thereafter it discovered that the former board of directors did not take any reasonable steps on the proper use of the RM4 billion Retirement Fund (Incorporated) (KWAP) loans, given in 2011 and 2012, for its general investment capacities and working capital.

It further alleges that the defendants, including Najib, failed to monitor the disposal of RM3.6 billion to SRC BVI, which was appointed to undertake overseas investment activities in the energy resource sector. SRC further alleges that the defendants failed to ascertain and monitor repayments under the KWAP loan schedule as required and inquire about the misappropriation of funds.

The new management, as mentioned in the writ, discovered a significant number of fraudulent and wrongful disbursements, transfers and utilisation of KWAP's RM4 billion loans.

It (the new management) also discovered that the utilisation of funds was against the nature and business SRC was set up for and incorporated, and the board did not perform due diligence and acted contrary to Bank Negara Malaysia's (BNM) requirements.

They are also alleged to have committed breach of trust, conspiracy, knowing receipt, dishonest assistance, wrongful conversion, abuse of power and misfeasance in public office, resulting in a loss of US$1.15 billion or the RM4 billion.

Besides SRC, others named are its subsidiaries Gandingan Mentari Sdn Bhd (GMSB) and Jendela Pinggiran Sdn Bhd (JPSB). All three companies have been placed under the MoF since January 2019 to stabilise their affairs and recover the losses and damages suffered.

Following Najib's defeat in the 14th general election (GE14), an investigation was done into both 1MDB, which was SRC's initial parent company, and SRC itself where the investigations are still ongoing.

The new management discovered that the directors had allegedly wrongfully disbursed the first and second grants contrary to SRC's approval. These include the wrongful disposal of RM42 million to Najib and other third parties which were not for CSR purposes.

For this, SRC, GMSB and JPSB allege that there were fraudulent breach of duties and breach of trust by all the defendants, as well as dishonest assistance and conspiracy, resulting in considerable losses and damages that amounted in excess of RM167 million.

In the suit against Umno, its president Datuk Seri Dr Ahmad Zahid Hamidi and secretary-general Datuk Seri Ahmad Maslan are cited, whereas against Umno Selangor, Tan Sri Noh Omar is held to answer.

These are to recover the wrongful monies from them that they received under the guide of the CSR responsibility requirement of SRC.

They are alleged to have received monies from SRC to the sum of between RM330,000 and RM53 million, resulting in a loss suffered amounting in excess of RM128 million. 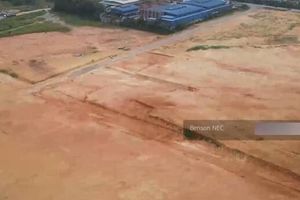