Woman from Sibu is latest victim of rabies in Sarawak

PETALING JAYA: Many businesses have been found to have misused the Temporary Occupation Licences (TOLs) issued in Cameron Highlands, the Auditor-General's Report 2012 revealed.

These businesses include homestays, commercial and residential buildings as well as farms that have sprung up on the highlands over the years.

Basically, TOLs are offered to applicants for temporary use of government land. The licences come attached with certain criteria determined by the local authority, or the Cameron Highlands District and Land Office.

Checks by the Auditor-General, however, revealed that not only were permanent buildings and farms established on the land, but the businesses had also flouted the land use and some have even expanded their operations, thus breaching the space requirements set by the TOL.

One licence holder had set up a business operation, Lavender Garden, in Kuala Terla, Ulu Tenom which is open to the public for a fee. However, under the TOL, the land is for agricultural use.

Another licence holder had set up a restaurant and a flower garden on land earmarked for residential use.

The report also revealed a homestay has been built on land designated for agricultural use. The annual licence fee of RM809 was only paid up until 2011.

Another licence holder had flouted the stipulation on types of crops allowed to be grown on the land. The Land and District office had only allowed for napier grass, bananas and jackfruit but some parts of the land have been planted with oil palm and rubber.

One licencee has sold a row of two-storey shoplots in Tanah Rata to another entity. The annual licence fee of RM142 was only paid up until 2011.

Another one has set up a two-storey house on a piece of land in Lubuk Tamang, Ringlet despite a clause stating only temporary buildings are allowed.

Another house has been built on more land space than stipulated under the TOL.

Five licence holders have set up vegetable and flower farms on more areas, up to 4.776ha, than stipulated by the TOLs. The licences were approved for areas between 0.8ha and 1.6ha, but the farms have taken up between 2.42ha and 5.58ha.

Other licence holders, who have set up billboards, buildings, stalls and workshops, have failed to pay their annual fees for the TOLs for years.

It has been reported that farms have also encroached into the forest reserves located in Cameron Highlands, placing a spotlight on heavy land erosion and unchecked hill slope development  in the area.These have resulted in recent floods that engulfed the Bertam Valley.

The audit report revealed that the Cameron Highlands District and Land Office issued 1,843 licences for agricultural purposes in 2003 which rose to 2,041 licences last year.

Although the land office has frozen the issuance of TOLs for agriculture development in an effort to curb the development of hill slopes, TOLs have been renewed and extended for three years.

The authority had taken to re-measure TOLs since 2011 and 1,582 licences have been measured up to date.

The audit report stated that due to this measurement exercise, encroachment into TOL land has occurred in Ulu Tenom, Ringlet and Tanah Rata at a whopping 991.4ha up until this year, costing the Pahang state government losses in revenue up to RM991,400. These farms have also encroached into forested areas.

Commercial and residential projects in Ringlet do not comply with criteria under planning permission.

Another section of the report noted that the planning permission for an eight-unit, three-storey shoplot project as well as a nine-unit, double-storey terrace house project in Ringlet was initially rejected on April 25, 2011, as it failed to comply with regulations for a 20ft (6m) wide back lane to accommodate septic tanks, manholes and so on.

However, the planning permission was subsequently granted to Serano Project Sdn Bhd on Aug 5, 2011, through a letter dated Aug 26, 2011.

The One Stop Committee of the Cameron Highlands Municipal Council, which convened on Aug 16,2011, approved the certificate of fitness (CFO) for the project, which was issued on Aug 26, 2011.

Therefore, the planning permission and the CFO were issued within a 10-day time frame.

In a reply to the auditors, the council stated that CFOs can be approved in stages. As a result, phase 2 of the project was not granted its CFO as it failed to comply with the 20ft-wide back lane requirement.

Apparently, the council's president had informed reporters in 2010 when the building was in the midst of being constructed that the slope behind the building was too steep and if cut to accommodate the 20ft width, it would be steeper, hence more dangerous.

However, this caution fell on deaf ears as it was not recorded by any department or agency.

For more stories, go to www.fz.com, the website for freedom of expression and fairness in articulation.

This article first appeared in The Edge Financial Daily, on December 6, 2013. 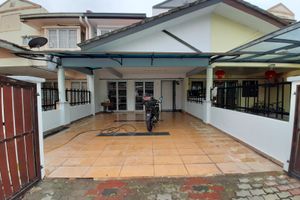