THE two co-founders of MCT Consortium Bhd (MCT) are standing on the glass floor right at the top of [email protected] City, from where one can look down 10 floors to the ground below. Some might find it rather disconcerting. But daring to be innovative and taking bold steps is how Datuk Seri Tong Seech Wi and Tan Sri Barry Goh Ming Choon have blazed their own trail.

“We are very positive thinkers,” says Tong, who is MCT managing director. “You don’t wait for the market to suit you. You always suit the market and find opportunity.”

Tong, a qualified civil engineer, and his business partner Goh, MCT’s chairman, have known each other since they were Form 6 students in Sitiawan, a small town about an hour’s drive from Ipoh, Perak. After finishing school, they went their separate ways. Then in the late 1990s, their paths converged.

“I came across a job that needed a civil engineer in 1998,” Goh recalls. “I then looked for my friend [Tong] to partner me. Our first job was with Tenaga Nasional Bhd.”

When Goh and Tong started off as a team, it was during the Asian financial crisis. Tong recalls. “We started during the worst time in 1999. We started as a builder and our first company was called Modular Construction Technology Sdn Bhd. The economy was very tough at the time and we had very little paid-up capital. We did a lot of bidding and came up with a strategy to beat the other bidders … we adopted the modular construction technology.”

Tong explains that modular construction technology is “an approach that involves simplifying building elements into standard modules, prefabricating the modules where possible and assembling these modules into the finished products. Through standardisation, repetition and prefabrication, material wastage is minimised and the construction process is made more efficient.”

The Tenaga job pulled the fledging company, which only had a start-up capital of RM250,000, through that problematic period. “At the time, Tenaga was a very good customer and we also had support from suppliers, who gave us good credit terms,” Goh says. “So friendship is very important because they said, ‘You take what you need because I know you can perform and you will eventually pay us.’”

This simple yet fundamental belief of building good relationships has helped MCT grow from a small outfit to what it is now. To date, it has ongoing projects with a combined gross development value (GDV) of RM2.264 billion, while projects in the pipeline amount to an estimated RM6.092 billion.

Through the use of its modular construction techniques, MCT established itself as a one-stop service provider, and set itself apart from the typical construction company.

“We were not purely in construction,” Tong says. “We started as a design and build company. We have been involved in every area of development except we don’t sell property or buy land. So when the opportunity came, why not take it?”

That opportunity came knocking in 2004 when Tong and Goh acquired a seven-acre freehold tract in USJ1, Subang Jaya. There, they developed two residential projects — USJ One Avenue and Park [email protected] One Avenue, which had a combined GDV of RM199 million.

As MCT continues on its upward trajectory, Tong and Goh have taken steps to get listed through a reverse takeover (RTO) of GW Plastics Holdings Bhd, which was formerly involved in the manufacturing and marketing of blown and cast plastic film packaging products.

“Listing brings a lot of benefits,” Tong explains. “First, listing comes with recognition. We go to professionals like valuers and accountants that certify our assets, our business accounts and everything. On top of that, we have a due diligence working group like investment bankers and consultants like lawyers and others… And finally, you have another layer, the Securities Commission Malaysia. They vet all the information and endorse it. So there is the recognition.”

Apart from that, customers are more likely to prefer buying from a listed company, Tong opines, as they feel more secure. Also, MCT will have better access to funding, as banks will be willing to give higher limits and lower interest rates. “Cost of funding will be lower,” Goh says, adding that the RTO exercise will be completed sometime in March.

When the RTO was announced last year, MCT was valued at RM1.21 billion, which some quarters considered too high. As a result, according to Tong, the SC requested a revaluation in June, with the result that the company is now valued at RM1.15 billion.

As the RTO process continues, Goh and Tong are looking forward to growing their company. Besides just building and selling properties, they plan to retain some.

The plan, Goh explains,  is to transform the group into an asset owner with significant recurring income. As such, they will retain 39% of their approved projects, which have a combined GDV of RM8.356 billion, as investment properties.

In the near future, the founders have decided to build affordable housing for the masses.

“For the next two years, we feel the market trend and need is for homes below RM700,000,” Tong says. “Out of the RM3.575 billion planned developments for sale in the new two years, 98% are earmarked for projects with an average price of below RM700,000 per unit,” says Goh.

For a start, MCT’s [email protected] and CyberSouth in Dengkil will offer affordable housing options.

At [email protected], the affordable apartment component, called One Residence, will offer 3,243 units in seven towers, priced from RM250,000 to RM400,000. At Dengkil’s CyberSouth township, 5km from Cyberjaya, there are plans to build 1,234 affordable apartments at an average selling price of RM191,000 each.

Come March, MCT aims to launch three products. The first will be in Dengkil’s CyberSouth township, which covers a total of 416.97 acres. Phase 1, called GreenCasa, will occupy 54.51 acres and has a GDV of RM200 million. It will comprise 418 terraced houses, with built-ups of 1,545 to 1,913 sq ft, and priced at RM510,000 onwards. The GreenCasa homes will not have any fences, and back lanes will be turned into linear parks. A cul-de-sac system will ensure added security and traffic safety. There will also be a private club house for residents.

[email protected] has a GDV of RM2.689 billion and is spread across 60 acres. Besides the affordable housing component, MCT has also developed Lakefront Villas, which was launched in June 2014, with a selling price of RM1.9 million onwards. The take-up rate is 50% to date out of 110 units available.

In addition, there is also Lakefront Residence that was launched in May last year.  This component will have eight towers sitting on 23.1 acres.

The last product to be launched will be Phase 3 of One City in Subang Jaya. While the details are still being finalised, it will have four towers on a 17.25-acre site. One tower of SoFos, with an estimated GDV of RM480 million, is targeted for launch in 1Q2015. The number of units is still be finalised, but the built-ups will be between 370 and 609 sq ft, with selling prices starting at RM950 psf.

One City in Subang Jaya, purchased by MCT in 2007 from Sime Darby, has a gross land area of 77 acres, with a net development area of 28 acres.

Phase 1 of One City was a commercial development called Garden Shoppe, comprising 63 shopoffices with a covered garden boulevard walk. The RM97.3 million Garden Shoppe was completed in 2012.

Phase 2 featured three components — Sky-Park, The Place and The Square. Sky-Park is a commercial and leisure development, comprising four blocks of 223 office suites and 96 retail lots, a fitness centre and dual purpose hall for cinema and seminars. There’s also a rooftop F&B area, a hotel tower of 243 rooms and an office tower.

The Place is a commercial development of 78 retail lots, an event hall and a rooftop banquet hall. The project is connected to Sky-Park via a glass bridge and completed in June 2014.

The Square is a mixed-use development with 124 retail lots, a food court and a rooftop space, and office suite/SoHo tower with 176 duplex and 150 studio units. This project is slated for completion in 3Q this year.

The occupancy rate of the offices is about 90% while for the retail lots, it is between 70% and 80%, says Tong.

One of the main challenges was accessibility to One City, says Tong. MCT worked closely with the authorities and also helped build the road infrastructure to their projects in One City.

In addition to development, MCT is also dabbling in the hospitality trade by managing the hotel component call eCity Hotel. Tong believes there is good capital appreciation for this business as it is a long-term business venture.

However, they may consider parking this hotel under an established international hotelier that will likely manage three upcoming hotels in One City, Tong reveals. A memorandum of understanding (MOU) will be signed in a couple of months, he says, adding that AEON and MCT has signed a MOU for 280,000 sq ft of space in the yet-to-be-completed Phase 3.

Goh and Tong are fully focused on MCT, which has a substantial landbank that will take about 10 years to develop. Thus, they are not thinking of expanding overseas although if the opportunity arises, they would consider it.

The future may look uncertain to many, but Goh and Tong are confident they will be able to overcome any challenges and continue to thrive. 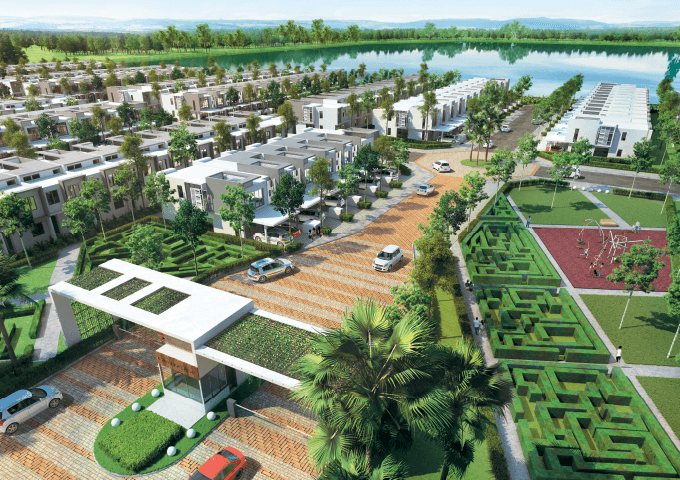