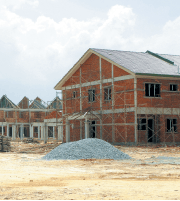 WITH the implementation of the Goods and Services Tax (GST) drawing closer, coupled with the tougher operating environment, property developers are likely to strategise to buffer any negative impact.

A senior executive of a listed property group says some developers are looking at the possibility of launching GST schemes for their upcoming commercial projects to make them more attractive for buyers.

“You see, when I sell you a piece of commercial property worth RM950,000, there is still a 6% GST charged on it. Banks will not likely finance the 6%, so buyers will only be able to get financing for the price of the property, which is RM950,000 million. Whereas, if the property has a total price of RM1 million, inclusive of the GST, consumers should be able to get financing for RM1 million,” he says.

“So, some developers are considering packaging the GST into the final prices of their commercial properties. It is all about packaging.”

Meanwhile, a tier-one property developer says it is looking at an easy payment scheme for the GST.

“This is to help our customers with their cash flow. We are still figuring out how to implement it,” he says.

“This in turn could impact overall margins, given the shift towards lower-margin products. In addition, we believe margins could be under pressure due to competition, rising development costs (due to the impact from the GST) and weak property market sentiment, which will affect product pricing and take-up rates,” it states in a Jan 15 note.

Maybank Research also expects margins to be compressed in the coming months due to the provision of more freebies and non-cash incentives to attract property buyers.

It notes that developers are in a final push for sales before the implementation of the GST in April, with many bringing forward their property launches and offering attractive packages, including discounts/rebates of up to 20%.

“Developers have expressed caution about the property market’s outlook over the 12 months post-GST implementation. They are expected to focus on affordable housing and landed properties while delaying high-end/high-rise launches,” it says.

Meanwhile, industry players and experts expect the prices of residential properties to rise 2% to 4% post-GST despite the fact that such properties are not subject to the GST. Developers are not eligible to claim input tax credit for such properties. They also cannot pass on any output tax to their customers.

“The permutation should be a 2% to 3% rise in property prices. Only raw materials will be subject to the GST … but what people do not realise is that the components of construction cost — which includes building materials — versus the GDV (gross development value) of the project is about 50%. This means that some 50% of the GDV will be impacted by the GST, but because residential developments are exempted from the GST, developers cannot claim the credit for the GST cost incurred by them for the raw materials. So, there will be an impact on our construction costs, which, based on calculations, could bring about a rise in prices of 2% to 3%,” says Ken Holdings Bhd group managing director Sam Tan.

“Raw materials make up half of the GDV here. In other countries, such as Hong Kong and Singapore, it is land cost that makes up the bulk of it. The land cost here is in the 20% range, depending on the area. So, with the GST coming in, developers will be hit mainly by the cost of raw materials.”

A senior property executive expects the market to see a price increase of 3% to 4%. “Developer units will see the increase. There will be no direct impact on sub-sales as there is no material cost incurred.”

A lawyer specialising in the property industry notes that although the sub-sale market will not see an immediate direct impact, prices could climb later because of the increase in prices of new units in the same area. “There is a soft take-up of properties now due to a couple of factors, including the rising cost of living, as well as banks getting stricter with their loan approvals.”

Hong Leong Investment Bank Research expects property buyers to be more selective as spending tightens. It points out that developers need to price their products strategically to remain competitive.

It says a 3% increase is enough to cause potential buyers to rethink their intended purchases, given the tight loan conditions and lower spending power.

“We continue to believe that buyers will adopt a wait-and-see attitude, especially after the GST is implemented. Given the slower economic growth and the recent drop in MIER’s Consumer Sentiment Index, we do not foresee the trend to experience a significant reversal but to stabilise before a gradual recovery. Hence, we are still keeping our mid-to-long-term favourable growth for the sector,” it notes in a Jan 26 report.

“We expect the anticipation of higher mortgage rates and the implementation of the GST to dampen sales in 2015, as buyers take a wait-and-see approach,” says Moody’s assistant vice-president and analyst Jacintha Poh in a report last Wednesday.

She adds that the magnitude of the sales impact will depend on developers’ target segment of project launches and pricing.