The privately-owned developer officially opened the office and showroom on Wednesday.

“The Malaysian market has been good to us which is why we chose to set up our representative office here [in Kuala Lumpur] and this will be the central office for the Asean region,” said its managing director Sam Tarascio.

The office will showcase Salta’s current residential developments in Australia featuring A Place to Live, Green Square and Essence South Yarra in Melbourne.

A Place to Live is located at Victoria Street and Burnley Street junction in the Richmond suburb. The development features 61 apartments with 1- and 2-bedroom units. The units are priced from A$399,000 (RM1.126 million) for the 1-bedroom and starting at A$699,000 for the 2-bedroom apartments. The development is 70% sold.

Construction for the development commenced in September 2014 and is scheduled to be completed in February 2016.

The A$250 million Green Square, located at 609 Victoria Street, Abbotsford, has been completed ahead of schedule. A limited number of 2-bedroom and 2-bathroom apartments have been released to the market post-construction. Altogether there are 406 units and 60% have already been sold. Prices for the units start from A$600,000.

The other development to be featured is Essence at 35 Wilson Street, South Yarra. Offering 92 units of 1- and 2-bedroom apartments, the development is already 80% sold. Units are priced from A$379,000. It is scheduled to be completed in September 2016.

According to Tarascio, the opening of the office marks the next step in a long-term strategy to partner with foreign investors.

“Establishing a permanent representative office and showroom in Malaysia fits with our plans to grow our international footprint to sustain the pipeline of properties that are being developed on Australian soil and explore opportunities to be involved in partnerships and projects overseas,” he concluded. 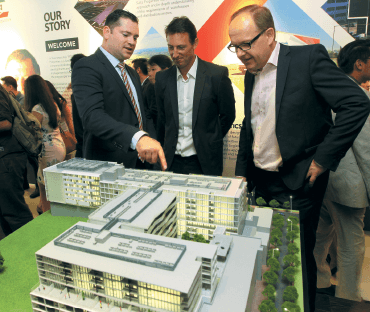