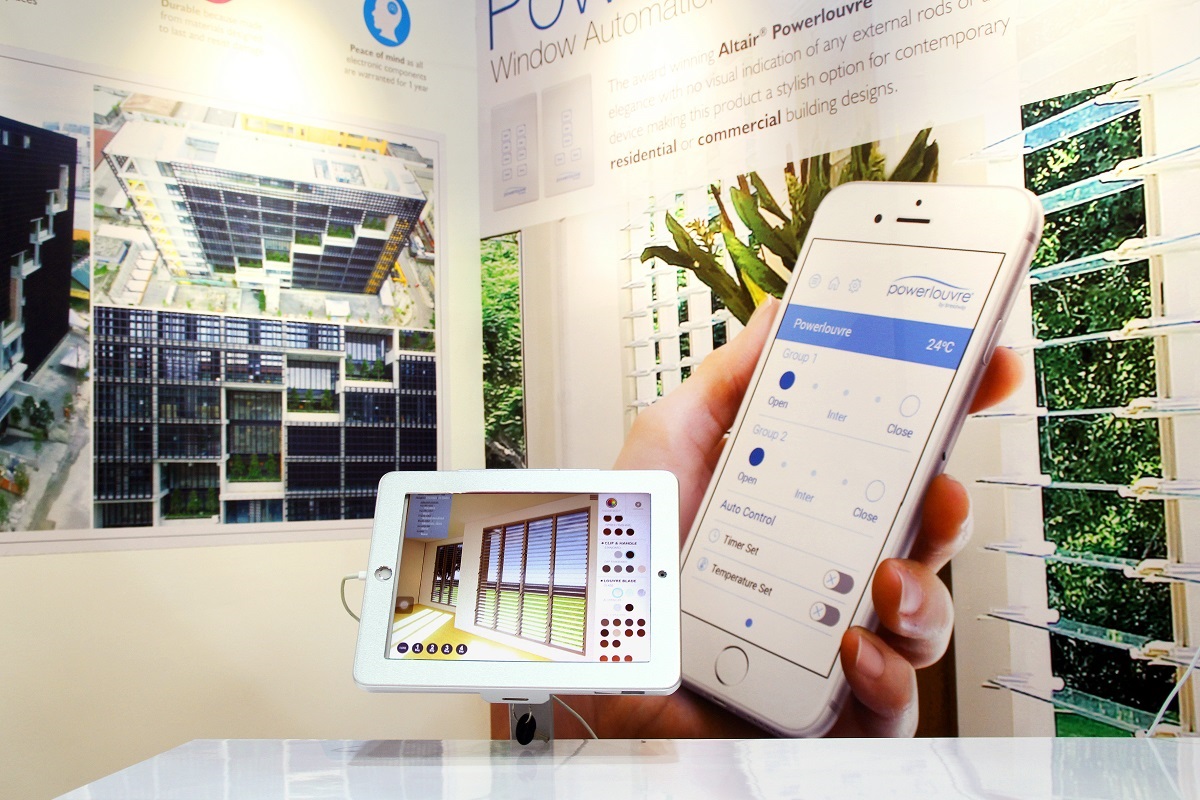 When thinking of louvred louvred, most of us may be reminded of the ones from our childhood — the slanted glass windowpanes in our family homes would be the immediate reference. “When people talk about louvred windows, they think of the very old ones, which are generally hard to open and close,” says Kelvin Ling, general manager of Breezway (Malaysia) Sdn Bhd, when met at the company’s booth at Archidex 2016 in the Kuala Lumpur Convention Centre.

The manufacturer of louvres is changing this perception of the product. Above and beyond invoking a sense of nostalgia, louvred windows improve ventilation as you can control the air flow through the openings. “As we know, louvres provide very good ventilation. That is how we are educating the market — let’s go green, let’s try ventilation (instead of air conditioning),” Ling says, citing the use of louvres in green buildings.

Louvred windows have been around for a very long time but Breezway is taking it up a notch in terms of innovation and design, two key aspects to which the brand attributes its success. Today, a common struggle for most businesses is to ensure they remain relevant to consumers. Breezway aims to achieve this through constant product development — the latest being a mobile app — all aimed at creating products that are not only pretty to look at, but energy efficient and safe as well. Breezway’s louvred windows are fully automated, and Ling says the brand is constantly working on improving their efficiency. Currently equipped with Bluetooth technology, Breezway hopes to produce windows that can be controlled from a further distance away in the near future. In addition, one can pre-set the preferred temperature of a room and the louvres will automatically open and close to maintain the ideal temperature. Anyone who has renovated his or her home would agree that one of the biggest obstacles in picking items for the house is visualising the end result. This problem is what the Breezway Louvre app has set out to solve, as far as its windows are concerned. “The future is going digital,” Ling says. So, the louvred window manufacturer, who has been in the business for over six decades, recently launched a mobile app. The Breezway Louvre app — which Ling says has been very successful in the business-to-business segment — is designed to bring the concept and the brand closer to end users.

The app, which is only available on IOS at the moment, allows one to better visualise how the louvres will look in the home. The app makes it easier to choose the type of panel and which colour would best complement your interior by placing the window in a virtual space on the app.

The benefits of the app are twofold — simplifying the process for customers while striving to be environmentally-friendly. “Each Breezway sales representative is a walking showroom. Gone are the days of carrying around bulky colour and product samples and dozens of printed brochures. We are doing our part in being environmentally responsible too.” Using this virtual mobile showroom, consumers can browse through the selection and try out the various designs without having to leave the home. Indeed, a picture speaks a thousand words, and besides simplifying the selection process, the Breezway Louvre app will increase customer satisfaction.

Note: The industry pioneer in Malaysia finds its roots in an Australia-based multinational company that has manufacturing facilities in Brisbane, Hawaii in the US and Klang, Selangor. Having manufactured louvred windows since 1947, the Malaysian arm initially supplied to dealers and distributors only before moving to the business-to-business segment in recent years. Today it exports to over 65 countries worldwide.

This article first appeared in the December 2016 — February 2017 issue of Haven, which comes complimentary with The Edge Malaysia Weekly.

Looking for properties to buy or rent? With >150,000 exclusive listings, including undervalued properties, from vetted Pro Agents, you can now easily find the right property on Malaysia's leading property portal EdgeProp! You can also get free past transacted data and use our proprietary Edge Reference Price tool, to make an informed purchase.
Louvred Breezway Archidex 2016 Klang
SHARE
Facebook Twitter