Gamuda to invest RM7.5 bil in construction in FY16

Cement buy call with a lower target price of RM5.80 from RM5.87: Gamuda Bhd is planning to invest approximately RM7.5 billion in the group’s construction division in financial year 2016 (FY16), where RM4.5 billion has already been allocated for its property development projects in Vietnam, Singapore and Melbourne, Australia.

We expect the bulk of the investment to be channelled into Singapore, where Gamuda is currently developing 590 units of Housing and Development Board flats worth RM2 billion on a three-acre (1.21ha) site in Toa Payoh.

We assume some portions of the remaining FY16 investment of RM3 billion to RM3.5 billion will be allocated for the roll-out of the Klang Valley Mass Rapid Transit 2 (KVMRT 2) project, which major contracts relating to this are expected to be awarded by mid-2016.

Notwithstanding that, MMC-Gamuda remains a strong contender to win the tunnelling package worth RM12 billion, backed by its solid track record in developing KVMRT 1 and its investment in related machinery, such as tunnel-boring machines.

The alternative proposal is expected to be capable of meeting demand for public transport in Penang until 2050.

The consortium plans to make the necessary submissions by the end of 2015 for the federal government’s approvals for land reclamation and public transport licences, which may take a year to complete.

Hence, construction works are only expected to start in the second half of 2017. 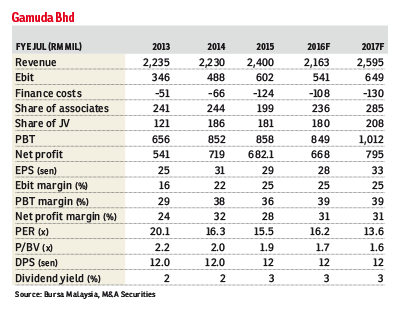 Gamuda has set a property sales target of RM1.32 billion for FY16. This will be supported by four new property projects, including HighPark Suites, Kelana Jaya, Selangor, with a gross development value (GDV) of RM600 million; Chapel Street, Melbourne, with a GDV of RM400 million; Toa Payoh, Singapore, with a GDV of RM2 billion; and Bukit Bentayan, Sabah, with a GDV of RM820 million.

The group’s total land bank size is now at 3,913 acres, with a remaining GDV of RM57 billion. We keep unchanged our earnings forecasts for now. Nonetheless, its FY17 earnings are forecast to jump by 19%, driven by acceleration in KVMRT 2 development and higher earnings contributions from its concession division. — M&A Securities Research, Dec 9

Curious how much you can borrow? Use LoanCheck to get your maximum loan eligibility from various banks, or LoanReport to get a FREE CTOS/CCRIS credit report.
Gamuda Construction Vietnam Mass Rapid Transit 2 MMC-Gamuda
SHARE
Facebook Twitter