Hence, they will be a party to Semantan Estates' judicial review proceedings, which has been set on Aug 15.

The decision was made by Justice Datuk Nordin Hassan in his chambers following submissions by the parties today.

Kenari Maluri's lawyers Datuk Edward Ng Boon Siong and Jason Ng Kau told theedgemarkets.com that there was objection from the liquidators but their motion had been supported by the government's lawyer.

"Hence the judge decided to dismiss the objection and allowed us to intervene," said Boon Siong.

Kenari Maluri's group director and chairman Datuk Tun Hasnul Azam Tun Hamzah, when met after the proceedings today, said "yes we are in and will see [you] again on August 15".

Justice Nordin had on May 29 fixed the date to hear the merits of Semantan Estates' claims to retain beneficial interests and cause to transfer ownership of 106.7ha along the former Jalan Duta (now Jalan Tuanku Abdul Halim) after the court granted the company leave on May 13.

The company wanted to intervene as it claimed that it wants to provide a win-win solution to a pre-Merdeka land dispute over the large tract of prime land in the former Jalan Duta here, where it claimed that it is friendly to both the plaintiff and defendants — namely the government and six other defendants.

It was previously reported on June 14 that Kenari Maluri had wanted to intervene in the judicial review dispute.

The company filed the judicial review on the grounds that the government and other respondents had failed, neglected, omitted and refused to comply with Semantan Estates to give effect to a 2009 court order.

They had sought leave from Justice Nordin's court for an order of mandamus to compel the respondents to do the following:

Besides this, the company also sought leave for:

Two affidavits of support by Lim San Peen and Jim Lai Chee Chuan were filed in support of the judicial review application.

It was reported in 2009 that then High Court judge Zura Yahya ruled that Semantan Estates retained beneficial interests in the 106.7ha along Jalan Duta, which the government had taken unlawful possession of, and meant that it had trespassed on the said land.

This decision was upheld by the Court of Appeal and the Federal Court.

On Nov 22 last year, the apex court led by Court of Appeal President Tan Sri Ahmad Maarop dismissed the review filed by the Malaysian government, six years after the initial Federal Court decision was made.

Looking for properties to buy or rent? With >150,000 exclusive listings, including undervalued properties, from vetted Pro Agents, you can now easily find the right property on Malaysia's leading property portal EdgeProp! You can also get free past transacted data and use our proprietary Edge Reference Price tool, to make an informed purchase.
Semantan Estates Kenari Maluri
SHARE
Facebook Twitter 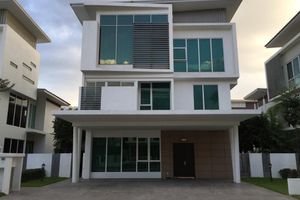