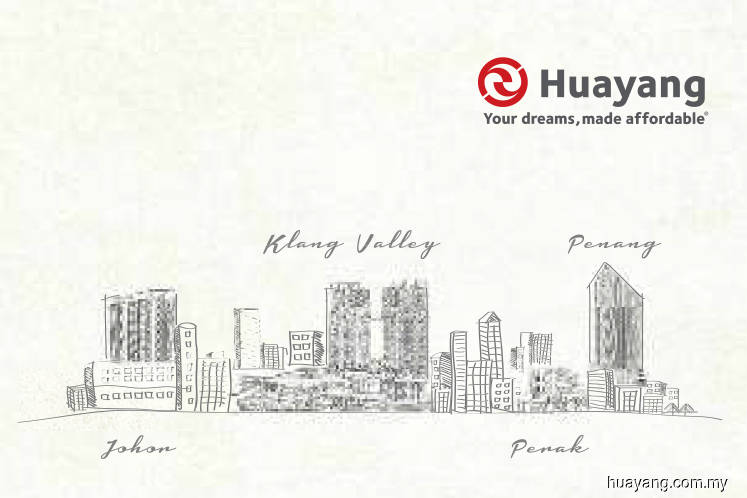 KUALA LUMPUR (Jan 23): Affordable housing developer Hua Yang Bhd remains positive on its outlook amid a challenging landscape even after its net profit for the third quarter ended Dec 31, 2019 fell.

The group explained that the lower net profit was due to higher selling and marketing expenses incurred and higher share of losses of associate as compared to share of profit in the previous year's corresponding quarter.

However, he said there are indications the market is responding well to the measures introduced by the government in 2019, such as the National Housing Policy and adjustments to the real property gains tax.

"We believe these initiatives, which are focused on first-time homebuyers who are our primary target audience, will leave a positive impact on affordable housing projects in Malaysia," Tan said.

He said affordability remains the key focus in home ownership and consequently, there is a rising demand for affordably priced homes of high quality in strategic locations nationwide.

"Over the next few months, we will be introducing new projects within our key regions that are not only affordable but also in prime locations, with the right amenities and comfort, all well suited for our target market of young families and first-time home buyers," he added.

Tan said during the third quarter, Hua Yang's projects in the Klang Valley were the largest contributors to revenue, with a contribution of 33%, followed by Penang at 32%, Johor (23%), Ipoh (11%) and Negeri Sembilan (1%)

Hua Yang now has a total undeveloped land bank of 451 acres with a potential gross development value of RM5.2 billion, to be developed over a period of five to seven years.

Looking for properties to buy or rent? With >150,000 exclusive listings, including undervalued properties, from vetted Pro Agents, you can now easily find the right property on Malaysia's leading property portal EdgeProp! You can also get free past transacted data and use our proprietary Edge Reference Price tool, to make an informed purchase.
Hua Yang Affordable Housing Developer Profit 3Q
SHARE
Facebook Twitter